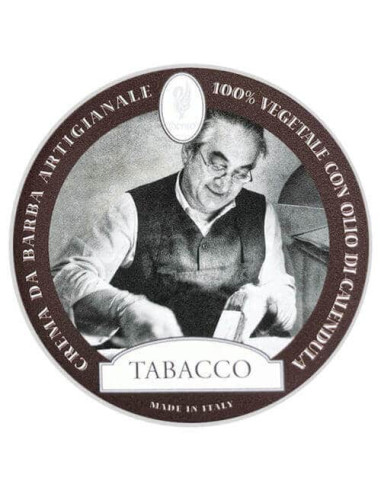 This shaving cream is loaded with vegetable-based ingredients that whip up a phenomenal lather. It is enriched with calendula (marigold) oil, with antifungal, anti-inflammatory, and antibacterial properties that might make it useful in healing skin. It comes in an elegant glass jar.

This warm, masculine aroma boasts notes of leather & tobacco. (This splash is unfiltered to keeps its characteristics intact, so it might appear cloudy.)

The predominant notes of tobacco and leather are mixed with the sweet notes of amber, vanilla, and powdered sugar, and the herbaceous and slightly floral ones. As in the aftershave Tabacco, the notes develop with a quick prelude of bergamot that opens the curtain to a timid floral choreography, waiting for the exhibition of tobacco and leather, supported by a musky, herbaceous and sweetish choir.